NGC 7822 is a young star forming complex in the constellation of Cepheus. The Object is a composite of the deep red H-alpha line and the O3 line. RGB pictures were taken to keep the natural looking of the stars.

The Crescent Nebula, also known as NGC 6888 is an emission nebula in the constellation Cygnus, about 5000 light-years away from Earth. It was discovered by William Herschel in 1792.

It is formed by the fast stellar wind from the Wolf-Rayet star WR 136 (HD 192163) colliding with and energizing the slower moving wind ejected by the star when it became a red giant 250,000 - 400,000 years ago. The result of the collision is a shell and two shock waves, one moving outward and one moving inward. The inward moving shock wave heats the stellar wind to X-ray-emitting temperatures.

It is a faint object located about 2 degrees SW of Sadr. To image the outer (blue-ish) shell, a OIII filter was used to allow the ultra-narrow, 3nm, Oxygen-III line to pass through only.

8x60sec were taken for each color, Red, Green, Blue and used for the star colors only.

30x120sec were used for the H-Alpha line and


The photo of IC5068 was taken last week at full moon using a Hα-Filter to block light pollution, block some of the moonlight and enhance contrast.

Only a very thin line in the deep-red spectrum passes through a Hα-Filter. Therefore, there is no color here.

IC 5068 is an emission nebula in the constellation Cygnus. The object, which represents a section of the Pelican Nebula (IC 5070), was discovered by Thomas Espin in 1899.

A solar eclipse happens when the Moon moves between the Sun and Earth, casting a shadow on Earth, fully or partially blocking the Sun’s light in some areas. People in  Canada, Greenland, and northern Russia can see the the full disc to be covered. In Germany, the sun was covered 7-15% only as you can see in the picture. Nevertheless, these partial solar eclipses are very rare and the next one visible from western europe will be end of 2022, the next full solar eclipse in 2081.

The picture shows the partial eclipse in Hydrogen Alpha, so a very thin line of the visible deep-red light spectrum of 0.5Å, that is five hundred-billionth of a meter. Taken from my garden, 200 pictures at 0.05sec each, only the best 50% were stacked.

Please bear with me, i take one solar pic a year so am not experienced in this at all. But this might change ...

This crop of the picture above and shows a filament, which is the thin line and can erupt into space. Such events are sources of coronal mass ejections that can produce disturbed geomagnetic and auroral activity at the Earth several days later (if the filament that was ejected is directed toward the Earth)

Right of that is a small plage region. These regions of higher-temperature hydrogen gas are often the sites of dead or dying sunspot regions.

!! As a general note, never look at the sun unprotected or through a telescope without proper filters in place !!

This image was taken at our site in Sonsbeck/Germany beginning of November 2020.  To me it shows impressive results taking into account light-pollution, half-moon and <3hrs of exposure time.

IC1396 is a concentration of interstellar gas and dust located in the constellation Cepheus, about 2,400 light years away from Earth.

This is a crop of IC 1396 showing  the  Elephants Trunk Nebula.

The piece of the nebula shown here is a crop and is the dark, dense globule IC 1396A; it is commonly called the Elephant's Trunk nebula because of its appearance at visible light wavelengths, where there is a dark patch with a bright, sinuous rim. It is a concentration of interstellar gas and dust within the much larger ionized gas region IC 1396.

The bright rim is the surface of the dense cloud that is being illuminated and ionized by a very bright, massive star (HD 206267) that is just to the east of IC 1396A. The entire IC 1396 region is ionized by the massive star, except for dense globules that can protect themselves from the star's harsh ultraviolet rays.

The Elephant's Trunk Nebula is now thought to be a site of star formation, containing several very young (less than 100,000 yr) stars that were discovered in infrared images in 2003. Two older (but still young, a couple of million years, by the standards of stars, which live for billions of years) stars are present in a small, circular cavity in the head of the globule. Winds from these young stars may have emptied the cavity.

The combined action of the light from the massive star ionizing and compressing the rim of the cloud, and the wind from the young stars shifting gas from the center outward lead to very high compression in the Elephant's Trunk Nebula. This pressure has triggered the current generation of protostars.(from: Wikipedia)

Taken at our Site in Sonsbeck/Germany at half-moon beginning of November 2020. The moon was close to the object so a little of RGB information could be captioned only.

Unfortunately, due to the Covid situation, all german "Star-Parties" got cancelled. However, the ITT in Kärnten/Austria took place.

I went there with my Takahashi FSQ106 and the Lunt. The weather was superb over daytime but super wet/dew during night and it became cloudy in the 2nd half of the nights.  Stayed from Mon-Wed with the actual gathering starting on Wednesday - so missed most of it unfortunately.

Anyway, had some good discussions over these two days and it was good to get out! 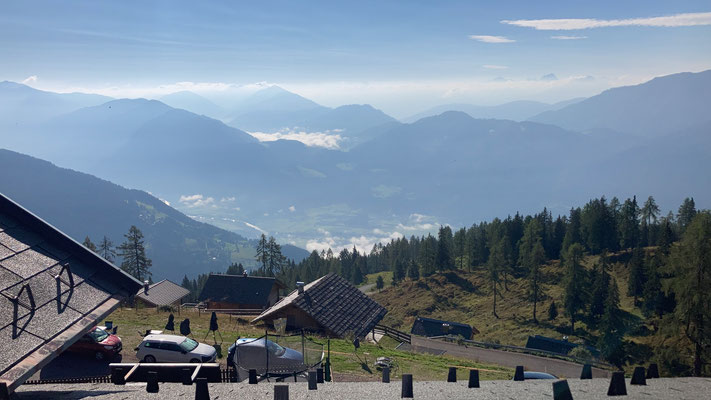 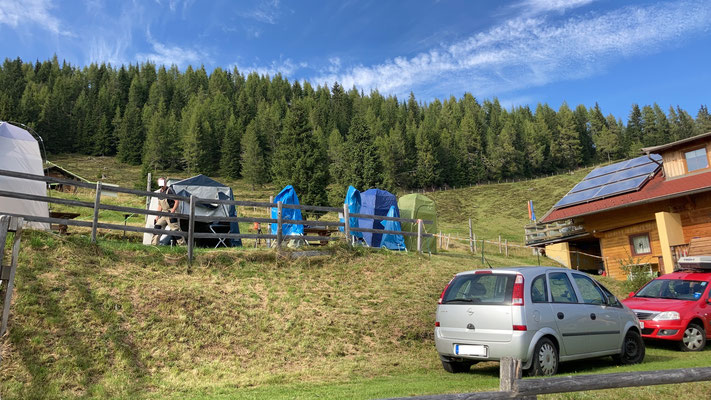 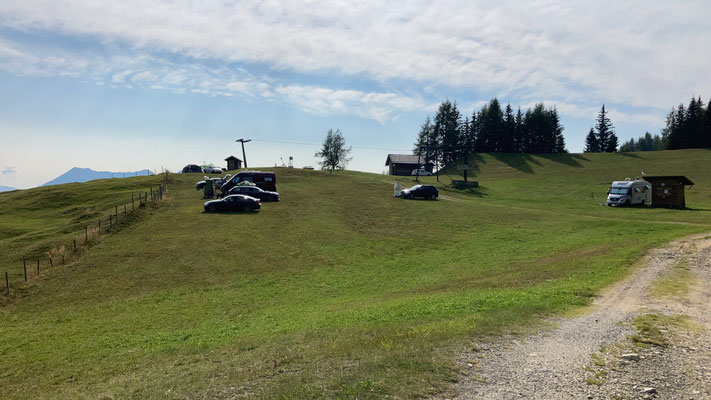 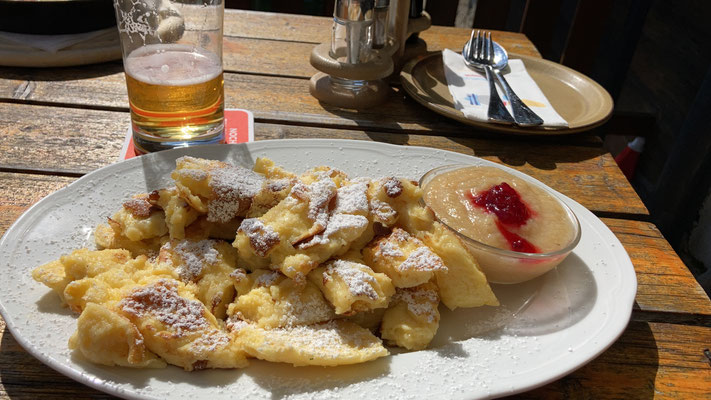 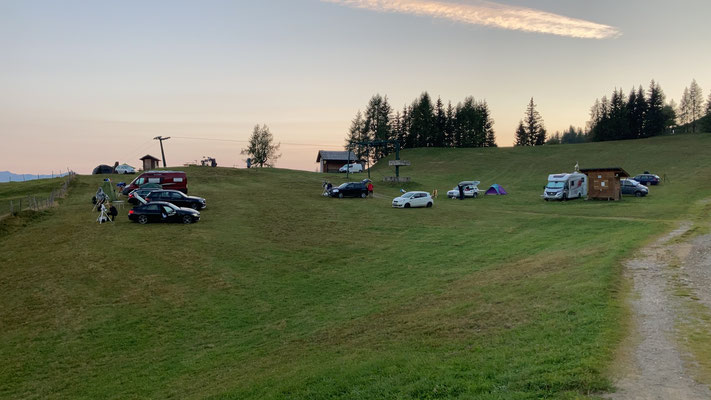 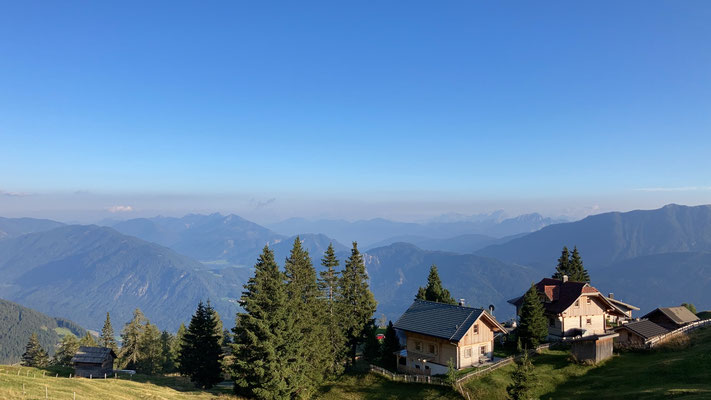 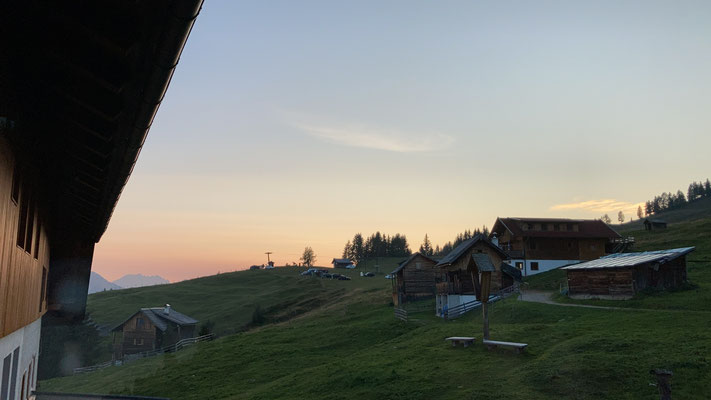 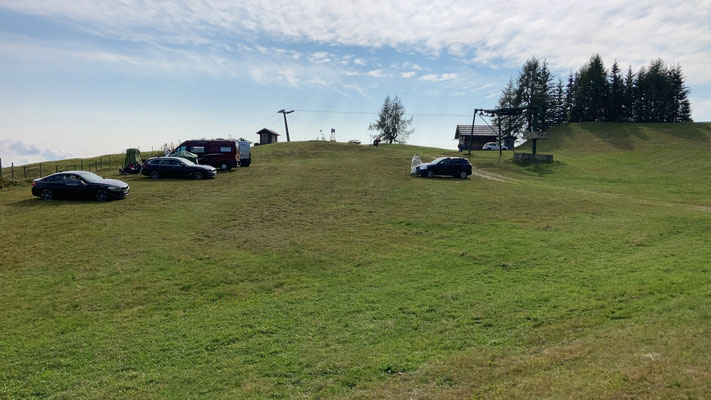 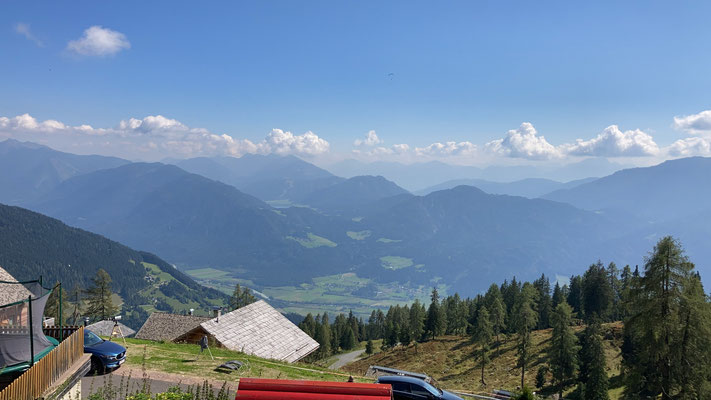 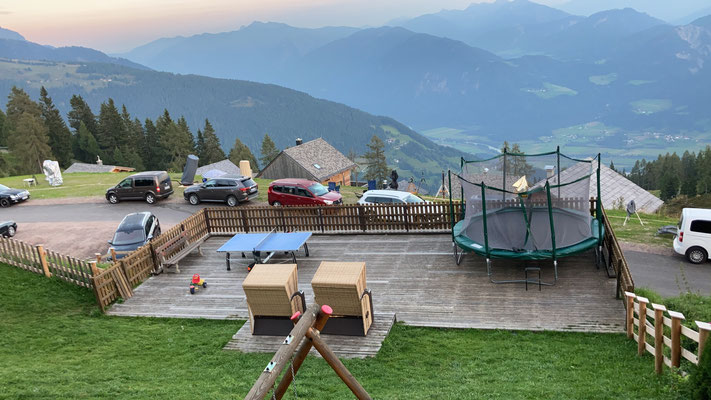 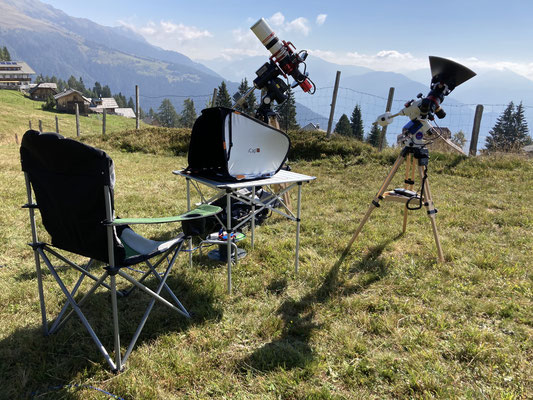 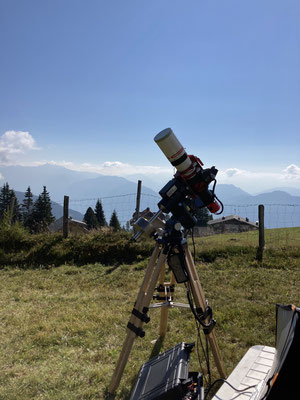 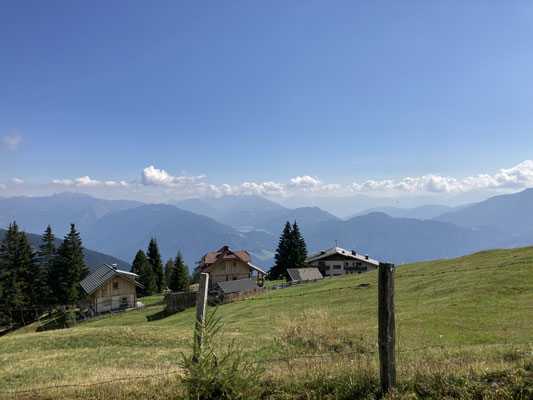 Just after Christimas i gave the ASI 1600 MMC its first light. The camera has a CMOS sensor instead of the traditional CCD. Its one of the first serious cooled CMOS cameras out there and i was very curious how it performs. With its very low read noise, i should be able to run very short exposures (seconds!). Obviously, you still need to get a decent amount of lights to get to a reasonable total exposure time.

Ulrich and i went to place near Lembeck. Still a bright place and the milky-way could not be seen.

Unfortunately, the distance Reducer->CCD was not right at all as i forgot to add a T2 extension. Luckily i had one of a similiar size. It worked but not perfectly.

It was quite cold, approx 0 degrees and we did not make it that long as Ulrich had to work next day so we went home at 1am already.

This image of the Rosette Nebula was made up of 33x60sec Ha and 12x60sec OIII. Impressive for narrow-band imaging with 60sec subs! There is still s good amount of noise in the picture so i might reprocess the image using darks. 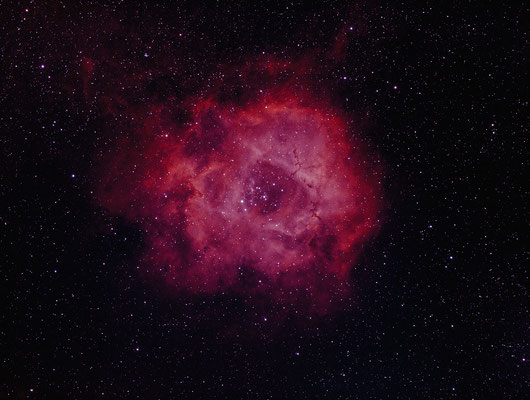 The Rosette Nebula (also known as Caldwell 49) is a large, spherical (circular in appearance), H II region located near one end of a giant molecular cloud in the Monoceros region of the Milky Way Galaxy. The open cluster NGC 2244 is closely associated with the nebulosity, the stars of the cluster having been formed from the nebula's matter.

The cluster and nebula lie at a distance of some 5,000 light-years from Earth and measure roughly 50 light years in diameter. The radiation from the young stars excites the atoms in the nebula, causing them to emit radiation themselves producing the emission nebula we see. The mass of the nebula is estimated to be around 10,000 solar masses.